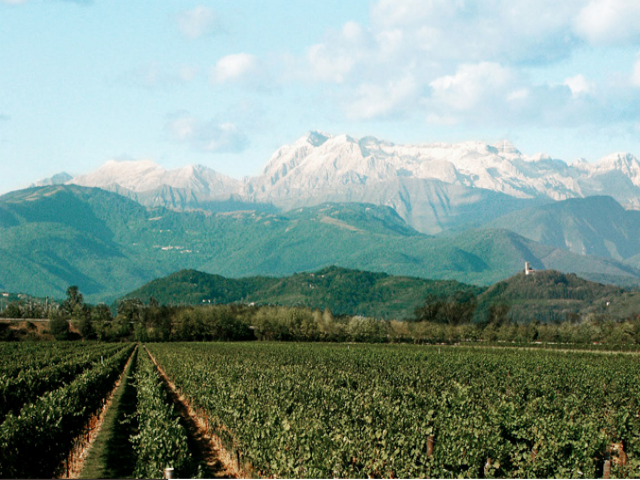 I agree with Ed. Cauliflower is a lackluster veggie. And, it’s pretty pitiful looking. But, I can make amends with anything used as a delivery mechanism for the robust flavors of pancetta, provolone and Parmigiano. To wash it down, you need a wine with equally powerful flavors. This is one of those rare pastas that can take a little new oak in stride.

With all the creamy goodness in this dish, why not pick up a rich Chardonnay or a Chardonnay-blend from Friuli? (By the way, Chardonnay has been planted there so long that it’s considered indigenous.) Vie di Romans makes two lovely ones that, though somewhat weighty like the pasta, have enough acid perk to cleanse the pasta off your palate. There’s the entry-level wine that is simply called Chardonnay as well as the single vineyard wine called Ciampagnis Vieris. Both are uncut Chardonnay that never see oak. For a blend, turn to one of my favorites: Jermann’s W…Dreams…. (This wine is dedicated to U2’s “The Joshua Tree” album.) It’s all Chardonnay but about three percent, and it is aged in small French oak barrels to give it a bit extra roundness on the palate as well as flavors of butter and vanilla.

Why not stick with “international” grapes with the reds, too? From Trentino, there is a beautiful Merlot and Cabernet Sauvignon blend called San Leonardo made at Tenuta San Leonardo. It’s a bit of a splurge, so if you’re looking for a more budget-friendly pairing, the same winery’s Villa Gresti, a blend of Merlot with 10% Carmenère should do the trick. Both wines are very lightly toasty from a portion of new oak.

Of course, if you can’t find these wines, try any Trentino or Friuli red or white. They’ll have the good acidity this pasta deserves, and both of these regions tend to make solid quality wines.