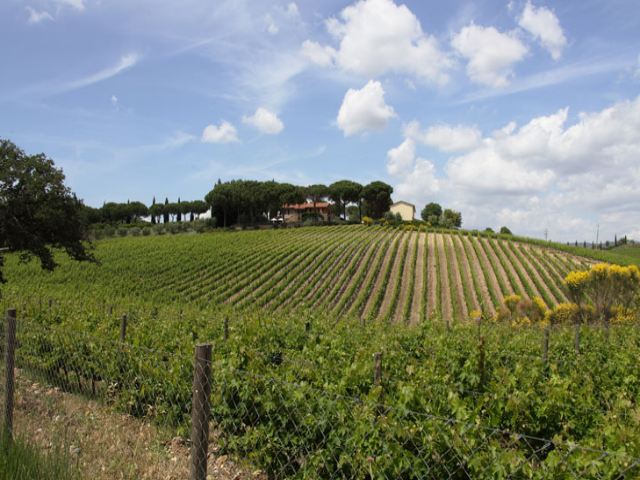 I often steer away from big reds, especially those with hints (or lashings) of new oak. However, this hearty dish can handle at least the former. Reading the recipe and drooling over the photo, I can almost taste this rich comfort food. That sends me running straight to the hills of Tuscany. This Sunday Pasta leans to the rustic side, so rather than race for the hills of Chianti or even Brunello, I opt for Morellino.

Morellino di Scansano is based on the noble Sangiovese, just like these other two great wines. However, it comes from a warmer, flatter stretch near Tuscany’s coast, giving this expression of Sangiovese richer, darker flavors: black rather than red cherries, moderate versus perky acidity, rounder versus sharper tannins. Morellino is more succulent, just like all the wonderfully fatty meats in this pasta. Sometimes Morellino also shows a sage note. This savory edge contrasts this pasta’s denseness while complimenting the recipe’s flat parsley lift.

Poggio Argentiera makes two bottlings that compliment this dish. The first is the Bellamarsilia, a slightly lighter bodied wine as it is made from young vines. It sees no new oak during its making, so I slightly prefer this bottling to its sibling, Capatosta. Capatosta comes from vines over 40 years old, which means it’s a more concentrated, profound wine. While there’s no doubt it’s more complex, it does have a touch of oak-derived chocolate notes that pair slightly less well with the pasta. However, starting with the 2010 vintage – which is just coming into the market, the winery has backed off the oak. If you want the more substantial of the two and still want some restraint, it’s worth seeking out the 2010.

Fattoria di Magliano also makes a great duo of Sangiovese wines to pair with this pasta. One is a Morellino and one is a straight Sangiovese, not labeled under the Morellino DOCG. Neither wine sees a single stave of new oak. The Morellino is called Heba, the name given the area in the Etruscan era. While these two wines both have a mid-weight body, the Sinarra has just a bit more concentration and aromatic nuance. Sinarra means “story telling” in Etruscan, possibly as though its juice tells the story of its vineyard.

This is one of those few pastas that I prefer red rather than white. However, if you’re looking for a chilled wine, try a rosato from the Maremma coast of Tuscany.

p.s. Check out our recipe for Cavatelli con Ragù alla Napoletana.  To learn more about ragù (and gravy) click here.