You are here: Home / Archives for Speck 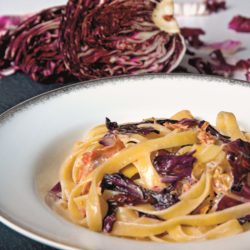 When most people think of Germany, they think Autobahn, engineering, and Oktoberfest. I, however, think immediately of my favorite Teutonic Titwillow, Lili von Shtupp (as played by the immortal Madeline Kahn) in Blazing Saddles. She remains emblazoned on my mind when it comes to all things Germanic. It’s twue. It’s twue… Which brings me to speck, a favorite ham from Trentino-Alto Adige, the far northern province of Italy. Bordered by Austria and Switzerland, it has… [Read More] 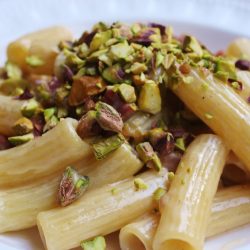 A Mister Philip Edwin Garrubbo (my elder brother) writes in with this week’s Sunday pasta recipe from Agira,  province of Enna, Sicily (population 8,000), a stones throw from Mount Etna, and motherland of two grandparents.  Until 1861 it was called San Filippo d’Argiriò, in honor of its patron Saint Philip. Upon fratello’s prodigal return, he received a hero’s welcome, feted by cousins we haven’t seen in decades. Agira is old and cool. It was not colonized by… [Read More] 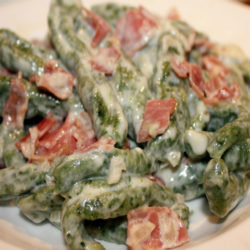 It’s Ocktoberfest, so break out your lederhosen and let me tell you the not so grim tale of Spaeztle and Gretel. We all know how it almost ended for Gretel and her brother Hanzel, narrowly escaping the witch’s oven in the woods.  Seldom told, however, is the story of what happened to Gretel after that scary day. You see, she went on to finish high school, and then like so many pretty blonde girls, she… [Read More] 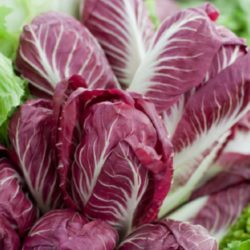 Ah, radicchio…  You are definitely not a common ingredient in American cooking, but your stem roots back all the way to ancient times.  Think the Roman scholar Pliny the Elder (23-79 A.D.), who was the first to write about radicchio in his Naturalis Historia as he praised and proclaimed its medicinal properties.  Who knew, radicchio, that you were used as a blood purifier and an aid to insomniacs.  I didn’t! Come to think of it,… [Read More]