You are here: Home / Archives for Proscuitto 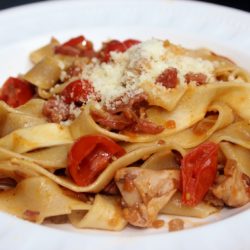 Poor poor poor Pierre Lapin.  First, he  was born with a French name, and then he was served up over a bowl of pappardelle. Perhaps, had he been named Pietro Coniglio he could have charmed his way out of his fate. Or as Peter Rabbit, he may have out smarted his captor. But no, such was not his luck. This week, we take a trip to Tuscany with Pappardelle al ragu di Coniglio. The first… [Read More]