You are here: Home / Archives for Penne 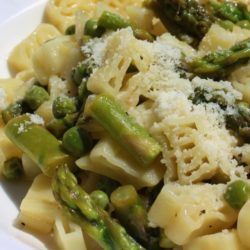 “Amazing grace how sweet the sound That saved a wretch like me. I once was lost but now I’m found. Was blind but now I see.” I had cataract surgery last week. Yes, I’m young for it; long story. But all I know is that the alarm clock at my bedside is no longer a blur of red and brown. All I know is that I’m no longer on the floor looking for my glasses…. [Read More] 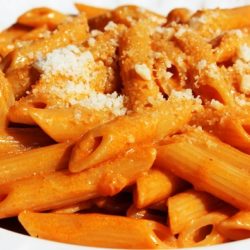 Shaken, not stirred. No, make that stirred (with a wooden spoon), not shaken. Either way, it’s a very 1970’s sentiment, for a very 70’s dish.  And although vodka sauce certainly does now exist in Italy (barely), I suspect that it was invented in New York, by some chef who had just spent the night partying with Andy Warhol and Calvin Klein at Studio 54.  By the next afternoon’s prep time, he needed his vodka so… [Read More] 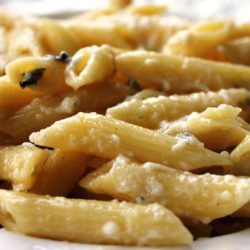 This Sunday Pasta recipe is dedicated to Veronica.  We will call it “Veronica’s favorite” and along with it we will wish her a very happy birthday! I suppose this was the inspiration for Kraft Mac n’ Cheese, which we all know they got terribly, terribly wrong (unless you like plastic cheese powder).  In the real maccheroni e formaggio, you can mix any cheeses you like, but in general, you should try to combine distinct cheeses…. [Read More]