You are here: Home / Archives for Pappardelle 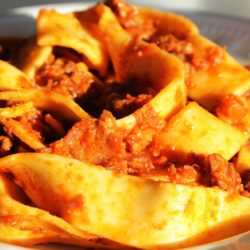 Woo Pig Sooie! If it were up to me, the University of Arkansas football team would be called the Cinghiali instead of the Razorbacks. Of course, I’d let them keep their battle cry, mainly because it’s got a nice ring to it when yelled in unison by a crowd of 80,000 coeds. Brilliant idea I know, but you tell me, I have a feeling the idea would fly in Arkansas only when pigs do. Throughout… [Read More]