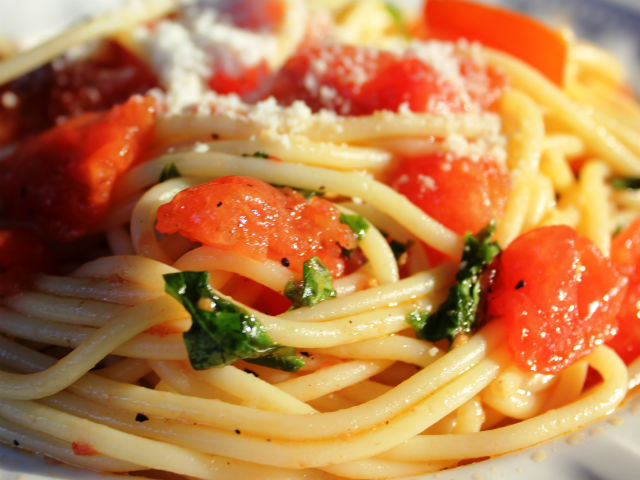 I’ve just returned from sunny Spain, where we enjoyed tapas and sangria late into the wee hours. It was a blast. The landscape was spectacular.  The people were amazing. The food and wine were delicious. Olé. But to be totally honest, after five days, I really did miss a little something … namely pizza, pasta, prosciutto, Parmigiano, gelato, espresso, cappuccino, Barolo, Brunello… I try to be open minded about food when I travel.  Really, I do.  It’s just that my taste buds are stronger than my mind, and I just can’t get over my love affair with Italian food.

But to be fair, Italian cuisine is the result of global collaboration, and for this week’s recipe, we need to thank the Spanish, especially the monarchs Ferdinand and Isabel, who in 1492, financed Columbus’ voyages to America. On one of those voyages, he brought back the tomato. Expecting gold, the king and queen were underwhelmed, and jailed him. The Italians, on the other hand, starting with Cosimo de’ Medici, first recognized the tomato for its ornamental beauty (of course), and then Botanist Pietro Andrea Mattioli named it “pomi d’oro” (now pomodoro, or golden apple). Tomatoes finally made their way into a Neapolitan cookbook in 1692, at which time Naples, ironically, was ruled by the Spanish Bourbons.

So, gracias España. Without you, perhaps we wouldn’t be eating this delicious Sunday Pasta.

Coincidentally, next week marks the annual “Tomatina” festival in Buñol, Spain, when thousands will gather to throw tomatoes at each other — 150,000 tomatoes to be precise. For those Spaniards who will be throwing 150,000 tomatoes at each rather than turning them into sauce for pasta, this recipe is for you. After 500 years, consider it a little food for thought!