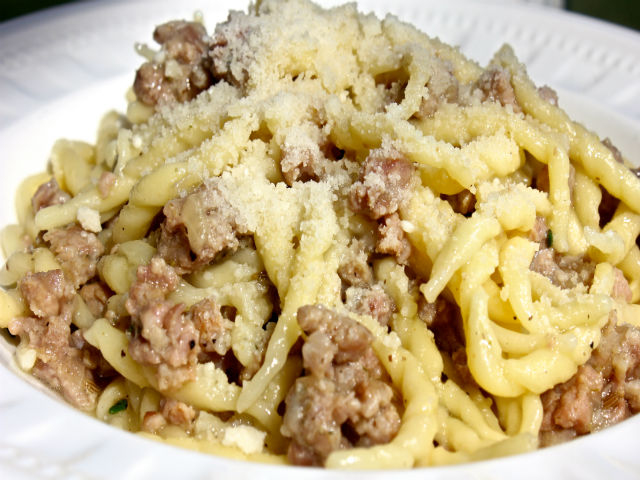 My mortadella has a second name, it’s  B-o-l-o-g-n-a. I was recently in Bologna, the home of mortadella, and I can assure that the real Mortadella Bologna has very little to do with its American namesake –  bologna, (aka, baloney). (It hurts even to write that word, much less compare it to the original.)

Two very trustworthy Roman friends (a chef and a hotelier) both independently told me that I needed to eat at Osteria Santa Caterina while in Bologna. I arrived in town, dropped my bag, and made a b-line for Via Santa Caterina. First came the mortadella, hand crafted and cut prosciutto-thin. Then came the tortellini, stuffed with mortadella. Da morire, as they say, “to die for.”

Naturally, I returned for dinner. Handmade pasta in a ragu di salsiccia in bianco, sausage ragu, slow-cooked for two hours. The owners  kindly gave me their recipe, which I kindly pass on to you.  Da morire.