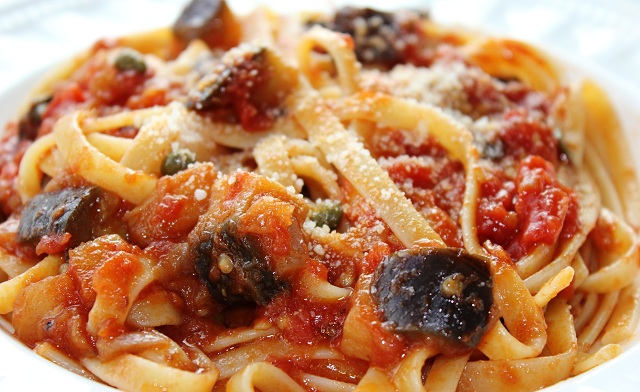 Don’t get too excited, this recipe has absolutely nothing to do with either Richard Nixon’s home in California or Saint Clement himself (died AD 99), who was a martyr and the 4th Pope. No, today we celebrate the birth of Clemente Fernandez, born to Edouard and Luciana, in London on February 4, 2012. Now, we all know that if Clemente becomes anything like his father, he will be no saint… though he may eek out enough charm to get by.  Still,  Clemente’s birth did inspire this delicious recipe and for me that’s cause enough for sainthood. I had the good fortune to be invited to their home just a few days before his birth. I’m generally not one for a hodge-podge, Iron Chef, make-it-up-as-you-go sort of cooking, but such was the task at hand. From the cupboard, we decided to use the eggplant, onion, tomatoes and capers, and successfully avoided adding the artichokes and mushrooms. Less is more, as they say.

In any case, the fortuitous result is another take on pasta and eggplant, but with the eggplant cooked inside the sauce, rather than fried and put on top, as is done with Pasta all Norma. I was skeptical too about adding the capers, but when I recreated it at home last weekend, I thought to myself, “by golly this is good.” And so luckily for all of us, Pasta San Clemente will now be part of our Sunday Pasta repertoire. And to Ed and Lu, tanti auguri! And remember, you’ll sleep again in 18 years.

Check out our wine pairings for Fettuccine San Clemente.