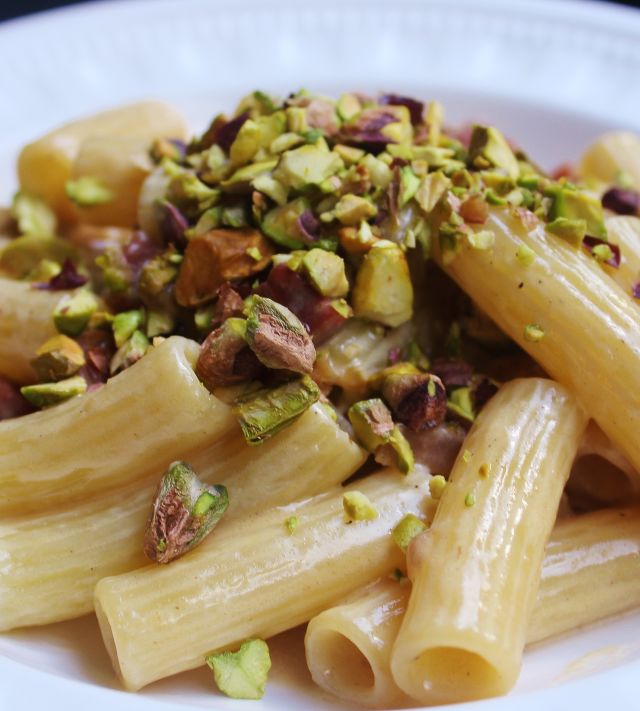 A Mister Philip Edwin Garrubbo (my elder brother) writes in with this week’s Sunday pasta recipe from Agira,  province of Enna, Sicily (population 8,000), a stones throw from Mount Etna, and motherland of two grandparents.  Until 1861 it was called San Filippo d’Argiriò, in honor of its patron Saint Philip. Upon fratello’s prodigal return, he received a hero’s welcome, feted by cousins we haven’t seen in decades.

Agira is old and cool. It was not colonized by the Greeks until the Corinthians drove out the last tyrant in 339 BC.  In the mid fifth century, it was the first Sicilian city to mint bronze coinage.   In 1063, it was taken by the Normans (Vikings), who defeated the Saracens (Arabs), and then passed through the hands of  the Hohenstaufen (Germans), the Angevines (French), and Aragonese (Spanish) and in about 1400 it became state property of Sicily. Over the years the town was influenced by many Jews.

It is any wonder that one of my grandmothers was blonde-haired, blue-eyed and the other red-haired, green-eyed. (Not to worry, their Italian noses and their cooking skills always gave their roots away.)

There in Agira, within eight hours, Primo ate both maccheroni alla norma (eggplant) and then this pasta with speck, cream, and pistachios (with local pistacchio di Bronte, of of course).

Below is the recipe.  You can’t argue with history.