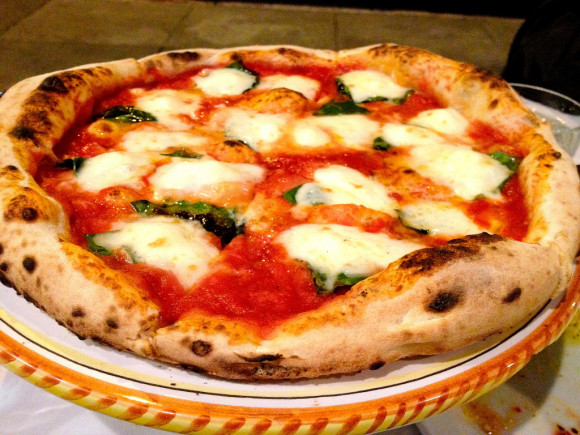 Pizza has been an elemental part of Italy’s diet since the Stone Age, when it was baked under the rocks of a fire. Given the limited resources of the time, pizza was far more basic.

Seasonings evolved slowly, so these primitive pizzas were often eaten as plain flatbreads. In addition, they had not yet been given the term “pizza.” The evolution from these simple flatbreads to pizza as we know it today is missing a few links. Like most history, we need to fill in the blanks.

What helped pizza bridge the time-gap and evolve into one of today’s most popular foods? Tomatoes! The tomato was an item of speculation and mystery up until the 16th Century. In fact, many Europeans thought the tomato to be poisonous. Poor citizens in the ghettos of Naples began adding tomatoes to their flatbreads in the mid 16th Century, sparking the birth of modern pizza. This Neapolitan pizza (pizza napoletana) was generally flavored with a combination of oil, cheese, lard, tallow, tomato, or anchovies. During the winter months, pizza was the only source of nourishment in these impoverished neighborhoods, but this ultimately proved beneficial. In a relatively short span of time, pizza became a source of economic gain for the poor. Perhaps lured by the rich aromas redolent in the air, tourists began visiting the neighborhoods around Naples known for making pizza. The city’s first pizzeria, Antica Pizzeria Port’Alba, opened in 1738. And, yes, you can still enjoy this delicious dish on the very same premises today.

As with almost every other food, pizza underwent a process of regional variation. The original pizza bases in Naples were soft and pliable, but Romans began using thin, crispy crusts. Another example of regional variation lies in Bologna, where meat was added as a topping. Even the round shape of pizza began to vary. Pizza al taglio (by the slice) was baked in rectangular trays and sold by weight. Despite these metamorphoses, purists recognized only two true pizzas: “marinara” and “margherita”. The marinara has toppings of tomato, garlic, extra virgin olive oil, oregano, and basil. It was thought to be the food of choice for sailors who returned home after months at sea. The margherita is a creation of chef Rafaele Esposito who, in 1889, baked three pizzas for King Umberto I and Queen Margherita di Savoia. One pizza was topped with pork fat, cheese and basil; another was topped with garlic, oil, and tomatoes. The pizza containing Italy’s national colors was the Queen’s favorite: green basil leaves, white mozzarella, and red tomatoes. This creation was named in her honor. From this point in time, pizza exploded in popularity. The following timeline will help clarify crucial points in the history of pizza.

1st Century B.C. – Written by Virgil (70-19 B.C.), “The Aeneid” describes the origins of the Roman nation and their cakes, or circles of bread.

1st Century A.D. – Marcus Gavius Apicius wrote “De Re Coquinaria”. This legendary cookbook contains a recipe for a pizza with a base of a hollowed-out loaf. The recipe included ingredients such as pine kernels, mint, pepper, cheese, garlic, oil, and chicken meat. The special instructions of “insuper nive, et inferes” meant “cool in the snow and serve.”

79 A.D. – Artifacts such as marble slabs and culinary tools resembling those commonly found in today’s pizzerias were discovered in the ashes smothering Pompeii after the eruption of Mount Vesuvius on August 24, 79 A.D.

16th Century – Tomatoes were brought back to Italy from the New World. The impoverished citizens of Naples began adding tomatoes to their flatbreads to form the modern version of pizza. The Tavern of the Cerrigloi became a popular hangout for Spanish soldiers due to their specialty: pizza.

18th Century – Queen Maria Carolina d’Asburgo Lorena (1752-1814), wife of King Ferdinando IV (1751-1821), had a pizza oven built in their summer palace of Capodimonte. The chef could now serve pizza to their guests!

19th Century – King Umberto I (1844-1900) and Queen Margherita di Savoia (1851-1926) met with chef Rafaele Esposito, who baked three pizzas for them. The pizza resembling Italy’s flag won the Queen over. It was topped with green basil, white mozzarella, and red tomatoes. Esposito honored the Queen by naming this pizza “Margherita”. The pizzeria was born. After being sold on the streets and in stalls, customers finally had a place to sit down and enjoy their meal while socializing with other patrons.
20th Century – 1905 – Gennaro Lombardi, known as America’s “Patriaca della Pizza”, opened the first pizzeria in the United States. The pizzeria was located in New York on 53 ½ Spring Street.

Italians take pride in their pizza and have taken steps to preserve its integrity. Specific rules and procedures have been installed to protect the authenticity of Neapolitan pizza. L’Associazione Verace Pizza Napoletana (“The Real Neapolitan Pizza Association”) was founded in 1984. L’AVPN recognizes the Margherita and theMarinara as the ONLY authentic Neapolitan pizzas.
Rules of the Association state that pizza dough should contain Italian wheat flour (type 0, or 00, or a mixture), natural Neapolitan yeast, salt, and water. To meet these requirements, the pizza dough must be hand-kneaded, never pin-rolled. The pizza must then be baked in a domed, stone, oak-wood-fueled oven at 485°C for no longer than 60-90 seconds. Size is also of utmost importance. A true, authentic Neapolitan pizza shall be no larger than 35 centimeters in diameter and no more than a third of a centimeter thick in the center.
L’AVPN has published the following recipes for a genuine Neapolitan Pizza:

Fresh tomatoes may be substituted for or in addition to peeled tomatoes above as long as they are fresh and are of the authentic: “S.Marzano dell’Agro Sarnese-nocerino D.O.P”., “Pomodorini di Corbara (Corbarino)”, “Pomodorino del piennolo del Vesuvio” D.O.P.”

Marinara:
pomodoro pelato g 70 – 100
olio di oliva (vergine o extravergine) g 4 – 5 (tolleranza 20%)
aglio 1 spicchio
origano g 0,5 (un pizzico)
sale quanto basta
Hand selected Neapolitan pizzerias such as Da Michele, Port’Alba, Sorbillo, Di Matteo, Brandi, Trianon, and Umberto are encouraged to spread the AVPN philosophy. These pizzerias intend to go the extra mile by only using San Marzano tomatoes (from the slopes of Mount Vesuvius), and Mozzarella di Bufala Campana (made from the milk of water buffalo raised in Campania). Furthermore, olive oil and tomato sauce must only be applied in a clockwise direction. Making an authentic Neapolitan pizza is no easy task.
L’AVPN certifies restaurants in Italy and approves them to use its logo. Out of over 61,000 pizzerias in the United States, only 27 are certified.

Bianca: mozzarella, garlic, olive oil. In Rome, the term pizza bianca refers to a type of bread topped with olive oil, salt and, occasionally, rosemary leaves. Pizza e fichi is a Roman version that has figs on the bottom.

Quatro Stagioni: same ingredients for the capricciosa, but the ingredients are not mixed, but rather are in different parts of the pizza

Quattro Formaggi: tomatoes, mozzarella, stracchino, fontina, and gorgonzola. (Sometimes ricotta can be substituted for one of the last three).

Sicilian: Its toppings are baked directly into the crust. An authentic recipe uses neither cheese nor anchovies. Sicilian pizza in the United States is not the same as the authentic Italian version.

Lazio: Available in Rome and many other parts of Italy, Lazio-style pizza has multiple forms. Pizza al taglio is baked in long, rectangular pans that are 1-2 centimeters thick. This pizza is cooked in an electric oven and sold by weight.

Ripieno or calzone: is a half-moon shaped pizza in the form of a pocket. It is usually filled with ricotta, salame, and mozzarella. This pizza is most often oven-baked but can also be fried.