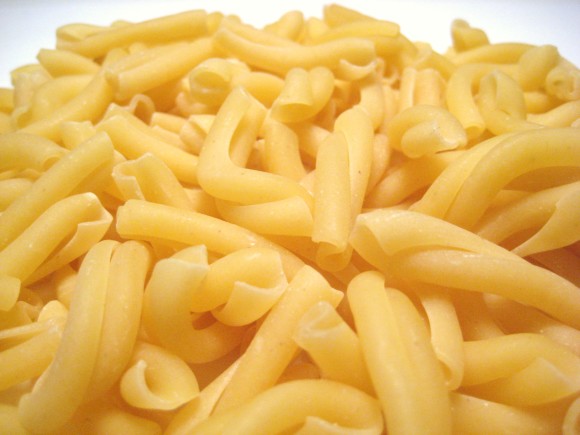 Marco Polo DID NOT return to Italy with pasta from China. This legend is false. In fact, pasta was invented by Italians and has become symbolic of their dedication to perfection and pride in the kitchen.

Ancient Rome was the birthplace of fresh pasta (pasta fresca),which was made by adding water to semolina-flour. This vital ingredient is made from durum wheat, a thriving crop in Italy’s temperate climate. Unlike the dried pasta found at your local grocery store today, fresh pasta was meant to be eaten immediately. The Arab invasions of Sicily in the 8th Century are thought to be the origins of dried pasta (pasta secca). At the time, Palermo was producing mass quantities of the new product. Some Arabic influence can still be found in select recipes, using ingredients such as raisins and cinnamon.

In the 1300’s, dried pasta became very popular for use on long nautical expeditions because of its shelf-life and nutrition. These voyages contributed to pasta’s worldwide appeal and led to advances in its form and technology. Back in Italy, pasta was slowly migrating north to Naples and reached its destination in the 17th Century. A few historical events boosted pasta to a national icon. It became a kitchen staple during the Risorgimento (Italian Unification) in the mid 1860’s. Italian political and military figure Giuseppe Garibaldi introduced the country to La Scienza in cucina e l’Arte I Mangiar bene, a cookbook written in 1891 by Pellegrino Artusi that featured pasta. Tomato sauce was introduced to Italy in the 19th Century but was met with skepticism. The tomato, being a member of the nightshade family, was considered inedible in many regions; fortunately, those rumors were put to rest shortly thereafter. The last major event to influence pasta’s early history was the Italian Diaspora, a mass migration of Italians from their country in the time between the Unification and World War I. These times of hardship led Italians to take even more pride in refining the art of cooking.

There are two major classifications: pasta fresca (fresh) and pasta secca (dried). From here, there are more than 400 unique types of pasta: sheets, strips, long strands, cylinders, unique shapes, flavors, and many other local varieties. There are more names for pasta than the mind can retain, yet all are made from the same basic ingredients — 100% durum wheat and water with a specific percentage of acidity and humidity under Italian law. Varying from the basics, light flavors and colors can be added to pasta with egg yolk, spinach, tomato paste, chocolate, and even squid ink. Each of these pastas creates its own unique dining experience when properly served. Another crucial aspect of the experience is pasta being married with an appropriate, complimentary sauce. The individual shape and texture given to pasta can be somewhat of a code in determining the proper sauce. A simple rule of thumb would be as follows: thick pasta = thick sauce, light pasta = light sauce.

Pasta fresca, the starting point of all pastas, is created with higher humidity, and some types only exist in this category. Variations can often be regional. Northern Italy is known to use all-purpose flour and eggs, while southern Italy uses the standard semolina and water mixture. Reputed to have the best pasta fresca in Italy, the Emilia-Romagna region often serves fresh pasta with cream sauces. Another regional variation could be found in Piedmont where butter and black truffles are a common ingredient. Other ingredients vary, from potatoes to ricotta.

Special tools are used when making dried pasta. First, the pasta is forced through holes in a die-plate and onto sheets for cutting. The next step is drying. Pasta secca is only considered real pasta if it is made in the proper Italian way, slow-drying it for upwards of fifty hours in a copper mold, and then in the open air. The rest of the world usually dries pasta in steel molds at extremely high temperatures for short periods of time, resulting in an inferior product. Italians take pride in their method and can be proud of a smoother tasting, quicker cooking pasta that can hold on to its sauce.

The following table maps out the various shapes and forms of pasta:

In order of thickest to thinnest.