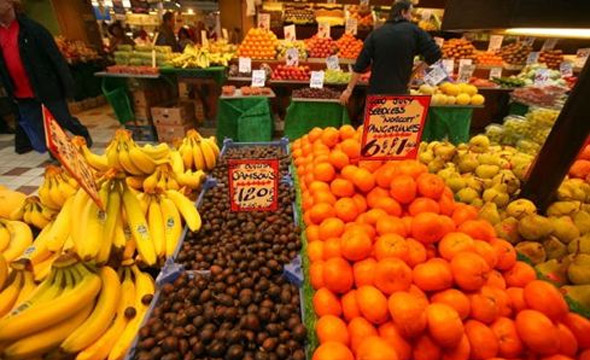 EATALY NYC is the first American branch of the grand food and wine marketplace created in Turin, Italy in 2007. The almost 50,000 square foot space, at 500 5th Avenue in Manhattan’s Flatiron District, houses multiple shopping and dining options, with everything either imported from Italy or produced in authentic Italian fashion. It is the brainchild of Superstar Chef Mario Batali, his business partner, Joe Bastianich and Joe’s mother, restaurateur and TV Celebrity Chef, Lidia Bastianich along with Oscar Farinetti, founder of the original Eataly. Amidst much fanfare, it opened on August 31st.

It‘s 11PM and an employee removes one of his orange crocs near the olive oils, looking for a blister. Was everyone wearing them? Could be part of the uniform, or just a one-time tribute to Mario. The espresso machines are being cleaned, servers and I’m guessing, department heads seem to be making their way to a central location. They clutch thick handfuls of receipts, looking exhausted but satisfied. It is the end of EATALY NYC, Day One.

Yes, I went. I didn’t know that the opening was at 4 PM. If I had, I would have made an effort to be there for the pasta ribbon cutting ceremony, or at least in the first few hours when I might have glimpsed Mario or Joe or Lidia. But, no, having an evening class, I arrived at 10:15, when the gelato line was very long. By the time I made my way to the pizza station with its pizzaioli imported from Naples, they were all done for the night. However, I did pick up some beautiful olives, a squat, crusty loaf of bread bursting with walnuts, a cold bottle of Italian beer I hadn’t tried before.
Everyone was courteous, engaged – the woman in red from Manzo (hostess? manager?) who left the restaurant to lead me to the door I had to exit in order to enter the wine shop, (separate from the rest of the market by state law), the girl from the produce department who got me a basket, the man behind the formaggio counter who cheerfully sold me impossibly tiny portions of cheese. While wrapping my blu di bufala, he told me about the man who brought buffalo to Lombardy, not their usual stomping grounds, in order to make it. When I asked him about a Cacciotta that was unfamiliar to me, he consulted the scale. Apparently, there are descriptions loaded in there – smart.

It seems like the kind of place where people will go to practice their Italian, or simply proclaim and prove their love of things Italian. There were some bona fide Italiani present – speaking fast and musically, dividing the air with their hands – wonder if they were paid atmosphere? Also witnessed a bond trader type asking whether he should order an affogato at the gelati or espresso station – a certain tone and tilt of head showed both his pride in knowing what an affogato was and a challenge to refuse him. The man in front of me in the espresso line asked for a “doppio “and was met with a halting response from the recent Midwestern transplant manning the machine. “A … double espresso?” she asked. “Yes, “ the man answered. “Doppio is double. In Italian. ” Proud, too. And yet he looked like his last meal might well have included a Bloomin’ Onion. People will surprise you.

EATALY is large and bright and inviting. The aisles are wide enough to navigate, but it doesn’t feel impersonally cavernous either. There are photo-ready desserts, pillowy twists of a variety of pastas, fresh, shiny whole fish, even the raw meat looks like Christmas morning. The seating and leaning and lingering areas are well-thought-out. Manzo is more unassuming, exposed and smaller than I expected. And it was refreshing to see everyone eating and drinking from china and glass – not a takeout container or disposable cup in sight. I was inspired to buy a snazzy , red canvas shopping tote: “ITALY IS EATALY” on one side ,“I DON’T USE …plastic bags” on the other. I’ll be carrying it when I pick up a few things for dinner tomorrow. Proudly. After all, I did make it there on Day One. Just barely, but I made it.

(Emily has since watched the ribbon-cutting ceremony on YouTube. It was private, anyway. Also, she now knows crocs are indeed part of the EATALY NYC uniform. She wishes to stress that the employee mentioned in the first sentence was a) wearing socks and b) not handling food at the time.)

Emily Mikesell is an actor/writer/musician/student of La Cucina Italiana living in Manhattan.