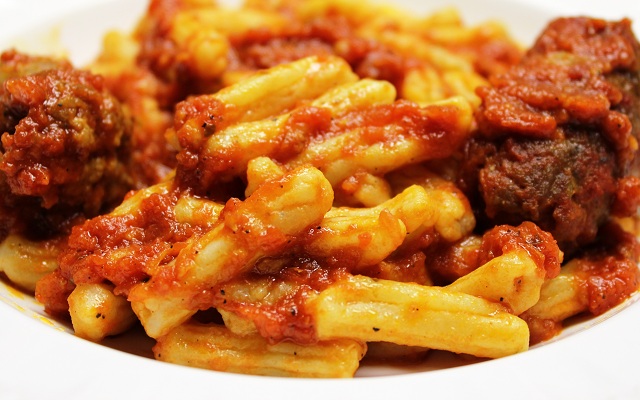 This here recipe is a lesson in diction, brought to you by the Cavatelli family, a century after their immigration to America. Cavatelli are a popular fresh pasta in southern Italy, where there are many regional names for these little dumplings: cavatieddi, cavateddi, cavasuneddi, capunti, cavatielli, and dozens more.  They are made like fresh pasta with flour, egg, and salt, but in some areas, particularly around Avellino, fresh ricotta cheese is added to the dough. It is said that at one point in time ricotta was cheaper than flour, and so was originally used as a filler. Interestingly, with the early 20th Century immigration from southern Italy to the U.S., cavatelli may have become better known in the northern U.S. than in northern Italy. And unfortunately, as the Italian language became diluted in the U.S, the name has been butchered, to the point where some gavones actually call them gavadeels.  (Gavone comes from cafone, for peasant.)

Cavatelli may be a richer, denser pasta, but they can still be light and fluffy, which make them very versatile. I love them with broccoli, but for a heavier, winter meal, on the Italian-American side, they also go well with a hearty red gravy full of sausage and/or meatballs.

And while all of America gathers this weekend to watch the New York Giants trounce those cafoni  from Boston in the Superbowl, the few, the proud, the lucky, will be eating Cavatelli al Ragu, simultaneously enjoying the best of the old and new worlds, regardless of their diction.

For the sauce: (You may want to double this recipe)

Check out our wine pairings to compliment this recipe and our About post that gives a brief history of the dish.