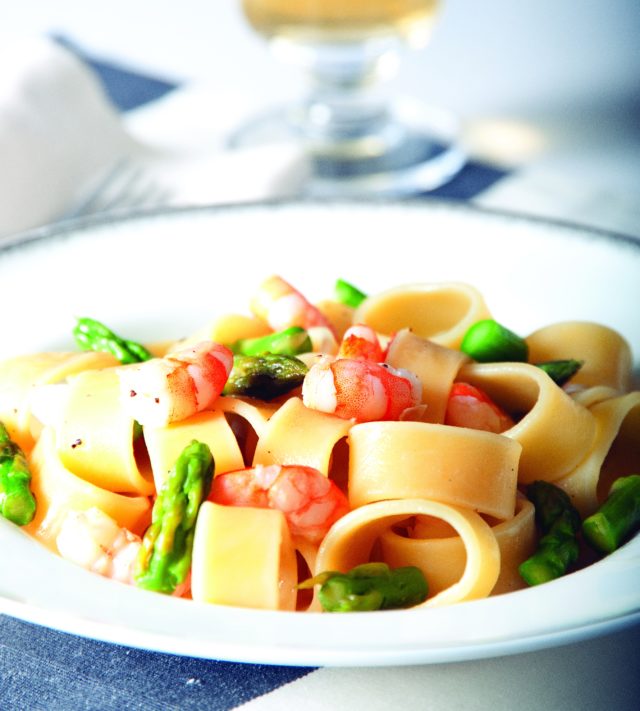 I always knew that Forrest Gump wasn’t the savant people made him out to be. Sure he made a fortune, walked a lot, and was wildly popular, but could he cook? I think not. He showed his hand during his litany of ways to prepare shrimp: “You can barbecue it, boil it, broil it, bake it…lemon shrimp, coconut shrimp, [blah, blah, blah] shrimp… That’s, that’s about it.” Wrong, Forrest! His rookie error? He forgot one of the most obvious and delicious ways ever to cook shrimp: with pasta! Just imagine if he had said, in perfect Italian, “Jenny, lo so che stai morendo, ti ho fatto un piatto gustoso di pasta con gamberi e asparagi per farti godere il tuo ultimo pasto.” (Translation: “Jenny, I know you’re dying, so I’ve made you a tasty bowl of farfalle con gamberi e asparagi for you to enjoy as your last meal.”) Now that would have been both impressive and dramatic. But no, like the dish itself, Forrest was just simple, healthy… and yes, crowd pleasing.

Check out our wine pairings to compliment Calamarata con Gamberi e Asparagi, as well as our About post that takes a brief look at the origin behind the dish.