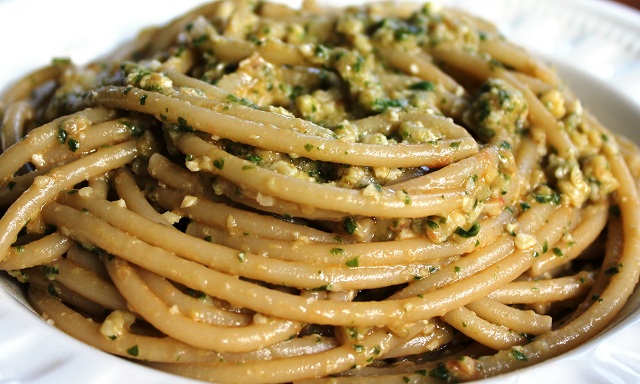 Christopher Columbus deserves a statue merely for being from Genoa, the land of spaghetti al pesto. Where would I be without pesto? And just where would we be without Columbus himself? (Hmm, not here…)

Aside from the obvious, those intrepid explorers of yore discovered some of our favorite foods. With what is now known as the Columbian Exchange (named for Columbus), their culinary discoveries brought tomatoes, potatoes, corn, and peppers to Europe. But the explorers also brought their food with them as they traveled. As an example, pesto alla trapanese was concocted when Genovese sailors, resting in the ports of Trapani, Sicily, used local ingredients to make their pesto sauce. Thus, local basil, garlic, tomatoes, and almonds were substituted for the ingredients of home.

Explore as you may, but you probably won’t find busiati around these parts, so you can either make it yourself, or you can substitute with bucatini, linguine, or fusilli lunghi.

And please, lay off Columbus. (Or is Amerigo Vespucci next on the hit list?)