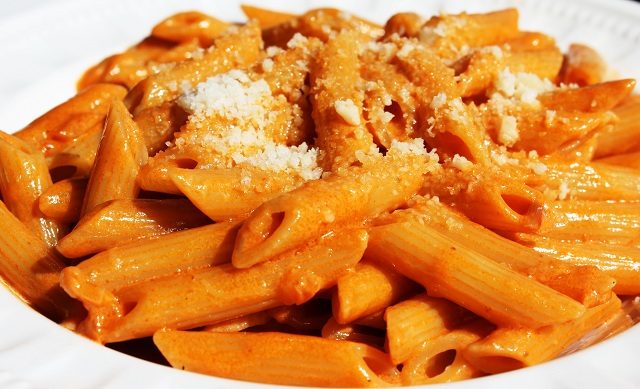 Shaken, not stirred. No, make that stirred (with a wooden spoon), not shaken. Either way, it’s a very 1970’s sentiment, for a very 70’s dish.  And although vodka sauce certainly does now exist in Italy (barely), I suspect that it was invented in New York, by some chef who had just spent the night partying with Andy Warhol and Calvin Klein at Studio 54.  By the next afternoon’s prep time, he needed his vodka so badly that he smuggled a bottle into the kitchen. When confronted by the restaurant owner, all he could say was, “But it’s for, it’s for, uh, uh, it’s for my new creation, penne alla vodka.” And the rest is a blurry history.

So let’s thank Calvin, Andy, Donna Summer and the Village People for keeping that chef out all night. And, thankfully for all of us, penne alla vodka is cheaper and more legal than what could have been the alternative, “penne alla coke,” which may sound more exciting, but probably doesn’t taste so good.

So this is my theory. What’s yours? Let me know below… The best answer gets a free Garrubbo Guide t-shirt!

Bring a large pot of salted water to boil for the pasta. Add the pasta when boiling.

Meanwhile, in a large skillet over medium heat, heat the olive oil and the butter. Add the onion and cook until golden. Add the tomato paste and 1/4 cup of water. Add the cream and cook for a couple of minutes. Add the vodka, and salt and pepper to taste, and cook for a few more minutes.

When the pasta is al dente, drain it and add it to the vodka mixture. Mix over medium heat and then serve immediately with a sprinkle of Parmigiano.