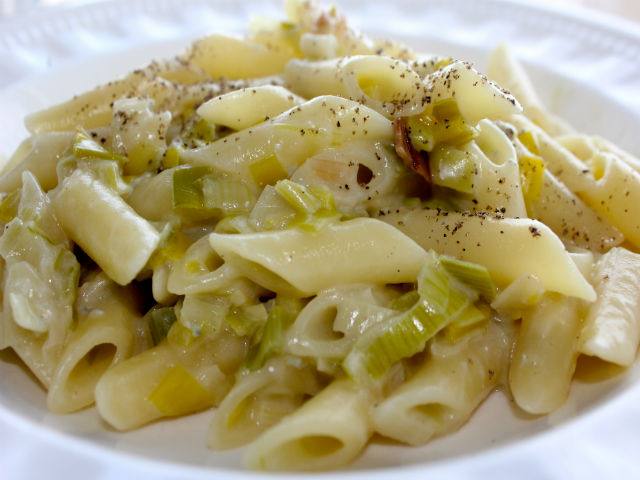 On the Sixth Day, he created Penne ai Porri e Gorgonzola. He was “busy” (chauffeuring texting teenagers) on the 7th Day, so Sunday Pasta would have to happen on a Saturday. Luckily for all of us, he’s flexible.

Call it creation or evolution, it doesn’t really matter. The result is delicious. But which came first?  Probably leeks. In the second millennium BCE, they were popular in Egypt and Mesopotamia. They were also one of the Emperor Nero’s favorite foods. Pasta dates backs to the 9th Century AD, probably introduced by the Arabs into Sicily, near Palermo. And Gorgonzola, which first surfaced a few centuries ago, is still mainly produced in Lombardia and Piemonte.

Regardless of how and when, these three ingredients, when combined, are heaven sent.

Prepare the leeks: Cut off the bottom and the rough green leaves on top. Slice into thin rounds and rinse under cold water.

In a large skillet over medium heat, add the olive oil and then the leeks. Saute until slightly golden. Add a cup of water and cover. Allow the leeks to soften further. Add more water if necessary.

Cut the gorgonzola into small cubes and add to the leeks. Remove from heat and stir until creamy. Add salt and pepper to taste.

Meanwhile, bring a large pot of salted water to a boil. Cook the pasta until al dente (2 minutes less than the package recommends). Drain, retaining some of the cooking water.

Add the pasta to the leek mixture. Mix in some of the retained cooking water if it seems dry.