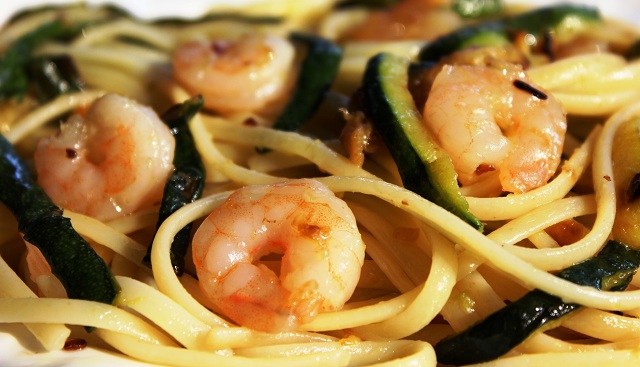 Contrary to what is believed in Texas and New York, bigger is not always better. I believe this to be true for shrimp, squash, and tongues. Stay with me. By tongues, I mean those made of pasta, i.e, linguine, which is the plural, diminutive form of lingua, and so means “little tongues” in Italian. These little tongues are the perfect width for so many types of sauces, including seafood sauces, because they grab a bit more sauce than spaghetti. (Note that linguine (leen gwee nay) ends with an e, and is not “linguini,” which rhymes with weenie and is an American mispronunciation.) A gambero is a shrimp, and so a gamberetto is a small shrimp, and gamberetti is the plural.  I like gamberetti because big shrimp are hard to eat with pasta, while small shrimp are tender and tasty, and require no knife.  And finally, zucchine is the plural of zucchina, or squash, as opposed to the larger zucca, which is a pumpkin. (On this one, both zucchine and zucchini are correct, depending on where you are in Italy, so the American “zucchini” is technically correct in both languages.) As an aside, and to further confuse matters, fiori di zucca are the flowers of zucchini not pumpkins. And as a bonus word, feel free to call some one a testa di zucca, or pumpkin head, especially if they’re acting like a moron.

Now go enjoy a big bowl of all of these small things, together with a big glass of wine, preferably from a small vineyard from small town in Italy.