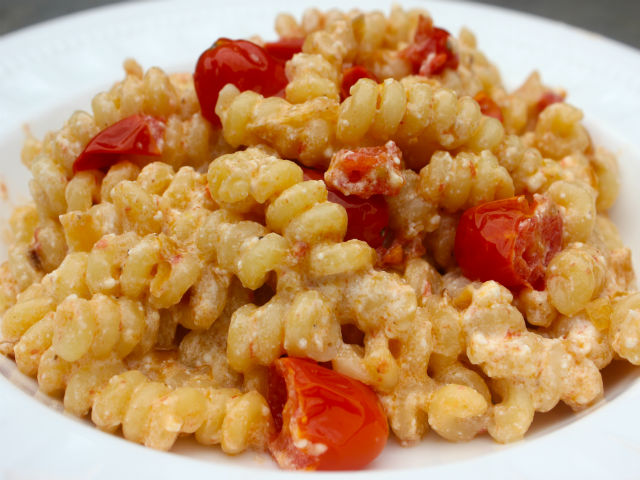 Tuscany would be just fine for me and my herd of bufala. There, just last week, we were lucky enough to tour Caseificio Inno al Sole, where 400 bufala roam free, 390 of which are female, along with 10 lucky (or harassed) bulls.  We then watched the team make mozzarella by hand, and tasted it and many other delicious buffalo milk cheeses, including ricotta. We ended with gelato di bufala.  Mmmm.

Ricotta is made when the whey from the mozzarella is “re-cooked” and gives up its proteins. The formed solids are then drained, traditionally, in a basket, leaving a woven pattern. Fresh ricotta in Italy is far creamier than anything in a U.S. supermarket; bufala milk adds a slightly tangy taste.

p.s. The pasta in the photo, fusilli corti by Setaro, and the ricotta di bufala can be purchased at Buonitalia.com.

p.p.s. Check out our wine pairings to complement this dish.

Bring a large pot of salted water to boil for the pasta. In a large skillet over medium heat, heat the olive oil and add the onions. Cook until translucent. Add the tomatoes and salt and pepper.

Place the ricotta in a mixing bowl. With a wooden spoon, whip together with salt and pepper until creamy.

Cook the pasta until al dente, drain it, and add it to the skillet with the tomatoes. Cook together for about a minute. Mix in the ricotta. Serve immediately,