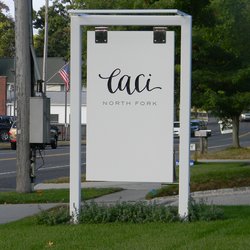 Fine Italian dining, the traditional way. This small 28 seat delight was founded by Anthony and Daniele Cacioppa and is housed in the former Albertson Farmstead. Chef Marco Pellegrini is a native of Umbria, in central Italy. Although he has only been in the United States a short time, he has been honing his culinary skills since he was  a young teenager by working in various restaurants. Pellegrini only cooks with fresh ingredients; if something isn’t in season, he won’t use it. The emphasis is on fresh meat, seafood and homemade pasta, simply but elegantly prepared.